What is Elastomer and its Uses? 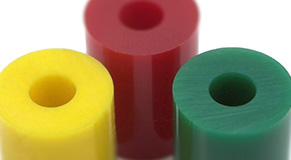 The word elastomer is from the term “elastic polymer.” Elastomer is a rubbery material composed of long chainlike molecules, or polymers, that possess the ability to return to its original shape after being stretched, even to great extents.

Elastomer must be modified to turn them into useful products and materials. Rubber, without the modifications, becomes sticky and soft when warm and hard and brittle when cold. This is because elastomer is a viscous liquid that crystallizes slowly below 40 degrees F (5 degrees C). These two disadvantages were overcome by the discovery of vulcanization in 1839 by Charles Goodyear, an American inventor. Mr. Goodyear discovered that mixing rubber with white lead and sulfur transformed the material and when heated the material stayed soft at low temperatures because of the way sulfur reacts with unsaturated hydrocarbon elastomer.

Primary uses for elastomer are seals, molded flexible parts and adhesives and used in vehicle manufacturing, food production, scientific applications and chemical processes. Elastomer is available in different grades, depending on their application. The various grades of the elastomer are a function of the manufacturing process. The performance of the different elastomer also varies according to the structural integrity of the substance. Improving the weakest area of the polymer does not always improve the overall performance of the elastomer, but sometimes leads to poorer performance in some other property of the substance.

There are more than 20 different types of elastomer and include natural and synthetic varieties. Elastomer are used for rubber tires and tubes for vehicles, motorcycles, bicycles and recreational vehicles, lawn mowers and other yard work vehicles, belts, hoses, gloves, matting, toy balloons, rubber bands, adhesives and pencil erasers.